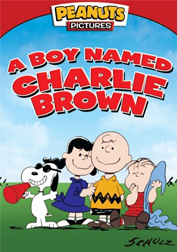 For an animated film these days to gain any mainstream acceptance or respect in America, it typically must be either a cartoony, kid-centric romp, or an adults-only comedy dependent on crude humor or shock value.

I’ve watched and enjoyed films of both descriptions in the last decade, but a recent viewing of 1969’s A Boy Named Charlie Brown made me wonder just why the heck animated theatrical releases of this caliber are so hard to come by.

Kid friendly animated movies are often made to be palatable to adults by forcing pop culture references into the script which do little to the movie other than confuse kids and perhaps evoke a slight mental chuckle from the older viewers.

I’ve watched A Boy Named Charlie Brown hundreds of times over my presently 22 year long lifespan, 99.9% of those viewings were done on a VHS copy of the movie recored from WPIX 11 on Thanksgiving Day in the early 1990’s.

Watching the movie this way is uniquely nostalgic for me because not only does the film itself bring back memories, but the products, TV shows, theatrical trailers and evening news promos featured in the commercial breaks capture what my world was like back when I first watched Charlie Brown, and remind me of what life was like when I was the age of Charlie Brown and his friends. 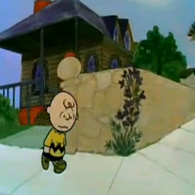 Having only seen the movie on television, only recently did it truly occur to me that A Boy Named Charlie Brown was actually a major theatrical release. With its flat, comparatively cheap looking and simplistic animation essentially unchanged from the television specials that came before it, Charlie Brown must have been quite a bold statement when compared visually to contemporary Disney releases like The Jungle Book and The Aristocats, especially with its extensive use of “blank” solid color backgrounds.

Musicals usually annoyed me when I was a child. It was only in the last year or two that I realized that A Boy Named Charlie Brown was in fact a musical. Only three of the songs are actually sung by the characters themselves, and all three are quick, fun, and visually stimulating.

The titular opening theme written and sung by Rod McKuen sets the mood and tone for the movie while serving mainly as a background piece that doesn't distract from or prolong the introductory sequence.

Beethoven’s Pathetique Sonata, played by Schroeder in a scene about midway through the film (performed by Ingold Dahl) resembles a sequence from Disney’s Fantasia, and while keeping with the mood and spirit of the rest of the movie is so starkly un-Peanuts-like that one could be shown the sequence out of context and never guess that they were watching a Charlie Brown movie.

The Pathetique Sonata sequence could probably stand on its own as a short artistic film, and it seeded me with an (admittedly picky and limited) appreciation for classical music that’s still with me nearly 20 years later.

Shchroeder’s sequence, in addition to other instrumental musical scenes dispersed throughout the movie do little to advance the plot, but add depth and life to the characters they focus on.
A favorite of mine is the National Anthem scene preceding the baseball game, which is jarring, colorful, and Mod inspired, as is the game itself, which makes extensive use of split-screen and multi-screen effects and colorful transitions with an unmistakably 60’s flavor.

A Boy Named Charlie Brown is a unique, beautiful film, and I’d recommend it to anyone of any age.

Part of me wants to think that today’s younger children, with the sort of kid’s shows on TV today, might be under-prepared to understand a cartoon with this level of maturity and substance (and lacking in wide eyed, blue haired anime heroes), but to do so would be patently unfair and prejudiced on my behalf.

Having watched A Boy Named Charlie Brown on a deteriorating VHS tape recorded from broadcast television my entire life, my recent viewing on DVD was quite an incredible experience.
The visual quality alone was jaw dropping, let alone watching it in wide screen without commercials and seeing all the scenes that had been cut for time when it aired on WPIX 11 seventeen years ago.

Having memorized every moment and line of my home recorded copy, it was quite jarring and fascinating to see what I’ve been missing all these years. Here is a list of what I remember being cut from my broadcast TV tape, along with some other oddities and trivial observations.
One other comment I’ll make about the DVD is that when I first started playing it, the playback quality was so bad it made my seventeen year old home recorded VHS look like high definition.
The picture skipped, scrolled, lost and regained its color, and faded in and out of total darkness at random intervals. I actually thought my TV was broken at first.

After some troubleshooting and online research, I discovered that I had fallen victim to a creative and highly disruptive form of copy protection.

Being a frequent watcher of VHS tapes as well as DVDs, I have my DVD player output running through my VCR. This is the most simple and logical setup for my entertainment system, as I also have numerous video game systems vying for limited space on my AV switch box.

Turns out that the DVD of A Boy Named Charlie Brown has some kind of special signal encoded into its video data that deliberately ruins its playback quality when fed through a VCR to discourage people from making unauthorized copies of the movie.

Out of all the major release DVD movies I’ve watched on my system recently, it strikes me as hilarious that such copy protection measures would be found in a Charlie Brown DVD of all titles. Anyone looking to pirate DVD movies would certainly not in this day and age be doing so using a VCR and VHS tapes, and would surely have sophisticated software and hardware which would rip and reproduce digitally perfect copies of the DVD without needing to actually play through the entire length of the movie.

If you encounter this problem, simply plug your DVD player directly into the input jacks on your TV and it should play crystal clear. 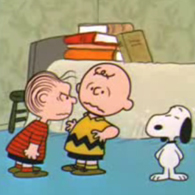 In closing, I’d like to share a memory I had regarding this movie from when I was in second grade, the same grade Charlie Brown was in. I tried to organize an unofficial class play of A Boy Named Charlie Brown and got several kids to spend their snack times “rehearsing” with me.

The experience was a fun one, but ultimately my effort to organize the play was quite similar to Charlie Brown trying to put on the school Christmas play in A Charlie Brown Christmas, only without the religious subtext. Needless to say, the play didn’t make it far, and we soon forgot all about it.

About a year later however, the girl who I cast as Lucy for my stillborn attempt at adapting A Boy Named Charlie Brown actually appeared as Lucy in the local stage production of You’re Good Man Charlie Brown which was seen by most of the town!

I feel proud to have, at the same age of Charlie Brown himself, been able to properly cast a classmate in the role of Lucy and perhaps had a hand in her eventual appearance in an officially sanctioned Charlie Brown play.

As a reward for my effort in attempting the class play, my teacher gave me a illustrated book adaptation of A Boy Named Charlie Brown which I'm glad to have in my possession fifteen years later.

Strange how I managed to write this entire feature without once mentioning Peanuts.