Race For Your Life, Charlie Brown 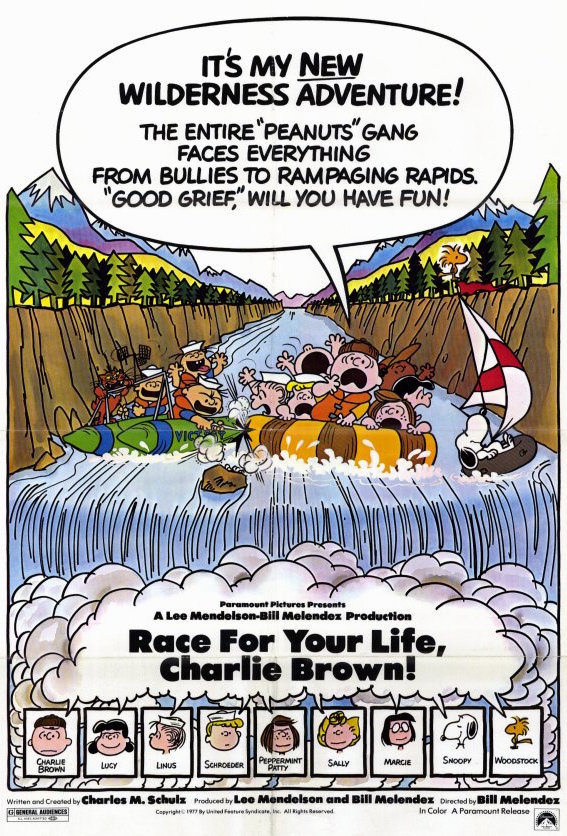 After a five year cooling off period following Snoopy Come Home, the third of the four classic Peanuts films, Race For Your Life, Charlie Brown, came to theaters in 1977, the same year the world was introduced to Star Wars.

Perhaps in a deliberate effort to "up the ante" and retain audience attention, Race For Your Life, Charlie Brown is the first Peanuts film to find its action taking place beyond the ordinary Peanuts setting of Charlie Brown's suburban American neighborhood.

It’s true that the first film featured Charlie Brown visiting Manhattan in the later part of the movie, and the second featured Snoopy and Woodstock venturing what seems to be a day’s journey away through several towns and a forest, but in Race For Your Life, Charlie Brown's hometown doesn't appear in the story at all, and the action is set entirely within the summer camp and surrounding wilderness.

While summer camp is a recurring backdrop for Peanuts, both in the comic strip and in the animated versions, this movie uses summer camp as a device to place Charlie Brown and his friends in an adventure beyond the scope of earlier works, as they participate in a river-rafting race taking place over multiple days through the forest, and of course, completely without adult supervision.

Like the first two Peanuts films, my personal history with this film began on a VHS recorded in the very early 90's. However, the recording didn't start until about two thirds of the way though the movie, so between the ages of four and six I knew Race For Your Life only by about the last third of the film. 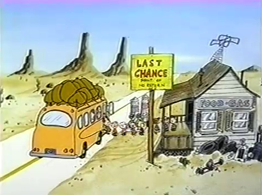 This may not seem like a long time, but being a child of that age, the period between ages four and six was a massive length of time, and when I eventually saw a complete VHS copy and was finally able to understand a lot of what had been going on, it was an eye opening experience I remember as a huge treat.

Race For Your Life begins with the Peanuts crew on a bus going through the desert to the summer camp. There's a sequence involving the bus getting a flat tire and Sally getting off the bus to beat up a girl who stuck her tongue out at her as the bus was passing, but when face-to-face with the girl, Sally chickens out and returns to the bus.

Later on, the bus stops at a roadside convenience store advertising itself as the "last chance" before a long stretch of desert. The store's side is piled with used tires and busted up machinery. Details like these give a very "lived in" and authentic feel to the movie in spite of its simplistic animation, which as usual, is essentially identical to that of the Peanuts TV specials from the period.

After the shopping trip, Charlie Brown gets left behind, and Snoopy rides him to Camp Remote on his motorcycle. 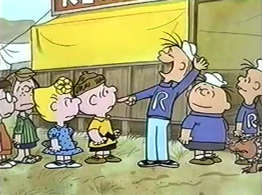 This is the first Peanuts movie to have anything resembling proper villains.

In Race For Your Life, Charlie Brown and his friends have to deal with a gang of bullies.

This gang is oddly unnamed, even though they all wear blue shirts with the letter "R" on them, as though they might call themselves the Rockets or something like that, their shirts go unexplained and in the movie they are known only as "the bullies", seemingly without even the distinction of being referred to as a proper noun.

The Peanuts gang has trouble adjusting to camp life, such as the scheduled activities, unheated cabins, and use of twenty-four hour time.

Though I'm pretty sure most of the characters had been depicted in comics and TV specials predating 1977 in which they attended other summer camps, Peanuts is not a franchise in which you can take continuity seriously, and the facts presented in each movie or special are there to serve the purpose of the particular story being told rather than build a congruent fictional universe. 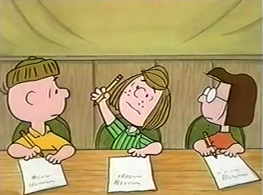 The bullies repeatedly cheat at camp activities when pitted against the Peanuts gang.

In one case they cheat in a potato sack race by hopping out of their sacks and running normally for a great deal of the course.

Not only should this have been extremely obvious to anyone observing the race, but the way its animated is as though their feet magically came out the bottom of the sack and then vanished back inside the sack.

This isn't something I'm saying as an overly-analytical adult, but something that's bugged me since I was a child.

These events culminate in a river rafting race. Even though there are evidently many different cabins at the camp, for some reason only the only participants in this grand main event are the Peanuts cast, with both the boys and girls from Charlie Brown's neighborhood each getting their own raft, and the bullies, who brag that they win the river rafting contest every year.

Charlie Brown and his friends see the bully's raft and comment that its no wonder they win the race every year, because their raft is fitted with an outboard motor, and electronic equipment including sonar, radar, and what the film describes as "direction finders", which modern viewers would take to mean GPS, though at the time this film was made the actual notion of GPS was likely something the creators weren't even conscious of. 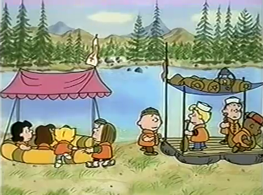 It's implied that the use of this navigational equipment is against the rules, but Charlie Brown and his friends do nothing to bring this to the attention of the adults who one would imagine were running the camp.

Whether using navigational devices is "cheating" in this race or not, the fact that the bullies would be allowed to use a boat with an outboard motor while the other kids in the race are using rafts they have to paddle by hand aught to raise some eyebrows about the legitimacy of this race.

Once the race starts, the movie "really" begins, and basically it just follows the exploits of Charlie Brown leading the boy's raft and Peppermint Patty leading the girl's raft, and them getting lost in the woods, sabotaged by the bullies, getting snowed in (even though its supposed to be summertime) and the adventures and situations you'd come to expect these character to get into given a glance at the movie's theatrical poster.

One joke that's carried on throughout the movie is the girls team's obsession with holding votes by secret ballot on even the simplest and most trivial of affairs. This begins with Peppermint Patty nominating herself as leader, and then holding an "election" with Peppermint Patty as the only candidate, with non-stop bickering amongst the girls over every detail of the process.

In some ways this seems like some some sort of unflattering commentary on feminism, especially when the girls, out of nowhere, decide to hold a vote to kick the boys out of a cabin and force them to sleep in the snow, particularly enraging when not only is that cabin more than large enough for all of the children, but the boys found the cabin first, and aren't even allowed to participate in the vote. 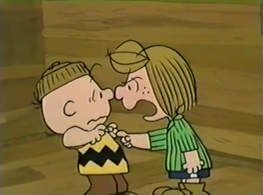 This scene is especially bizarre since the boys and girls were laughing and singing as they shared the cabin together, only for Peppermint Patty to suddenly call up a vote to throw the boys out of the cabin, and when the boys protest, accuse them of being anti-democracy even though they weren't allowed to vote.

While tge summer camp setting is a traditional staple of Peanuts and an obvious chance to breathe new life into the film series, a high adventure story featuring a river rafting race with Charlie Brown and his friends facing off against the elements of nature and a gang of vicious bullies isn't really what the heart of Peanuts is all about, especially since even without the bullies, most of the action depicted in the movie could have taken place largely unchanged.

Most of the situations the Peanuts gang find themselves both before and after the race begins don't directly involve the bullies, and most of those that do involve the bullies could have been rewritten to have been strokes of bad luck having nothing to do with deliberate acts of sabotage carried out by mean spirited rival children.

This is where I feel like the bullies fail to serve the general spirit of Peanuts.

Charlie Brown is a good person who struggles to find happiness and self esteem in the face of mishaps and misfortune that are usually the circumstance of random bad luck.

At the outset of this film, Charlie Brown says he wants to use the camping experience as a chance to reverse his bad luck and develop qualities that make him feel more in control of his life. 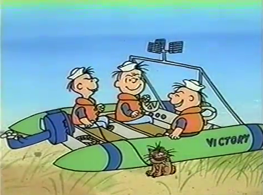 Difficulties Charlie Brown confronts during the rafting race, like choosing the wrong path down the river, or his raft being washed away from the beach where he parked it, could have been coincidences of chance Charlie Brown would have had to overcome, like the challenges he faces in the comic strip and in many of the animated versions.

In this film however, many of these acts are carried out by the antagonistic bullies, who once they sabotage Charlie Brown and his friends, vanish until the next time the writers call upon them to repeat the act. This makes Race For Your Life a movie about Charlie Brown having to overcome "bad guys" who are actually out to get him, rather than him overcoming his own self esteem issues.

Additionally, one would have to wonder how anyone could possibly take these bullies seriously when their main mothod of intimidation is threatening to sick their cat on the other children. A cat they keep on a leash.

Nitpicks aside, Charlie Brown and his friends deliver just the sort of action you'd hope for them to have the chance to exhibit given this setting and situation.

The music, main songs, and even the simplest of cues, stay with me, and while at least one of the songs does have lyrics, Race For Your Life does not have the feel of a musical present in the two earlier Peanuts movies.

There isn't a great deal more to say about Race For Your Life, Charlie Brown. I fully enjoyed it when I was a child, and I enjoy it today, through out of the four classic Peanuts movies, I'd say that this may be perhaps the least successful, but being the least of a tetralogy of well loved animated films is nothing to be ashamed of. 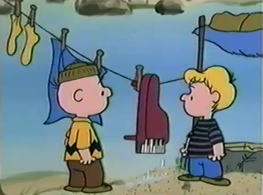 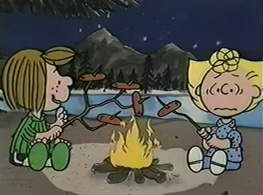 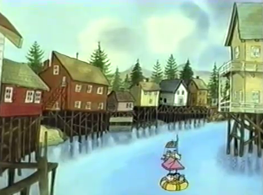 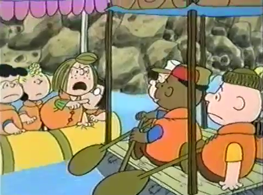