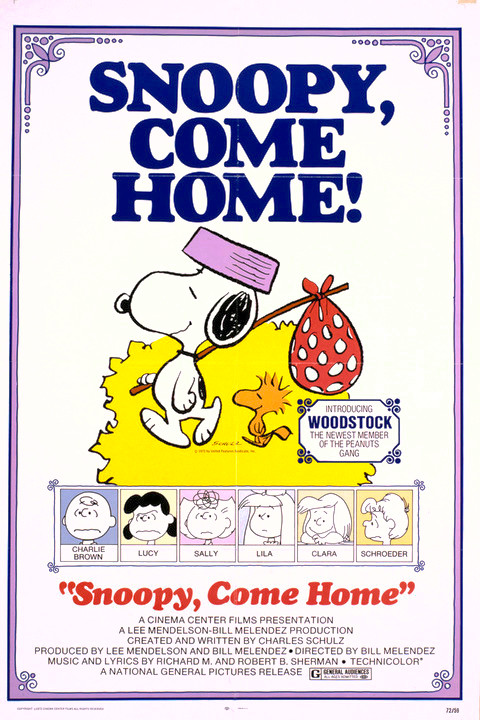 After the success of 1969's A Boy Named Charlie Brown, a second Peanuts movie, Snoopy Came Home came along in 1972.

Just like A Boy Named Charlie Brown, my memories of this movie were seeing it broadcast on WPIX 11 on Thanksgiving Day, 1992, which my parents had the foresight to record on VHS so I could enjoy it, complete with now timeless commercials, for years to come.

It's funny that the first and second Peanuts films would air together on that same day, as they're both what I'd consider "covert animated musicals". I never thought of either of these films as musicals when watching them as a child, yet the lyrics to so many of the songs, such as "Snoopy Come Home", "At The Beach" and "No Dogs Allowed" were such a distinct part of my early childhood.

I think this is because unlike a prototypical animated musical, such as a Disney classic, where there's a distinct shift of mode between "normal mode" and "musical number mode" in which the scenery, movement, and atmosphere revolves around the characters singing a song that usually also advances the narrative, Snoopy Come Home instead uses its songs as background pieces which the characters themselves don't actually sing, and which don't actually dominate the pacing of whatever is taking place on the screen. 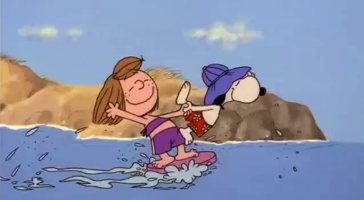 So when "No Dogs Allowed" is played as Snoopy as kicked off the public beach, it feels less like a "musical number" and more like classical Greek chorus.

"No Dogs Allowed", along with other songs like "Best of Buddies" and "Gettin It Together" serve the function of subtly narrating the film while allowing the film's main character, Snoopy, to carry the film in spite of his inability to speak.

It's interesting how they made Snoopy the main character of this movie without him having any spoken dialog. Snoopy being a  "silent" character talking only through barks and yelps provided by Bill Melendez has been a tradition of the animated adaptations of that began with the first Peanuts special, 1965's A Charlie Brown Christmas.

However, in the original Charles Schulz comic strips, Snoopy had extensive dialog represented via "thought bubbles" similar to Garfield, and this was an essential element to his character in those comics.

It's very impressive that the animated depiction of Snoopy as "silent" works so perfectly, even in a feature length screenplay in which most writers, had the convention of a silent Snoopy not already been successfully established, would be begging for permission to allow Snoopy to talk.

Snoopy Come Home basically begins with a depiction of Snoopy's daily life in Charlie Brown's neighborhood and his interactions with the kids in his life. 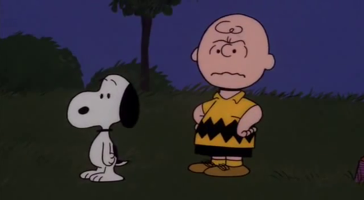 Things start going south for Snoopy as he finds himself unable to play with his human friends at places like the beach and public library due to "No Dogs Allowed" signs, and then ends up having arguments and misunderstandings with Linus, Snoopy, Charlie Brown, which makes him feel alienated.

Snoopy then gets a letter from his previous owner who is ill and asking him to visit her at the hospital. Snoopy and his bird friend Woodstock take off, leaving all the children wondering where Snoopy went and feeling guilty that they were mean to him.

Snoopy's journey has him venturing to the hospital where Lila is being cared for, and weighing his conflicted loyalties to both Lila and to Charlie Brown.

The journey of Charlie Brown and his friends has them digging up the history of Snoopy's mysterious previous owner, and basically trying to deal with finding a way to feel good after suffering what they fear might be the permanent loss of a friend.

Both halves of the story tie together well. This is probably the most sentimental of the four classic Peanuts animated films, and features what might be some of the most infamously gut-wrenching scenes of the entire Peanuts franchise. 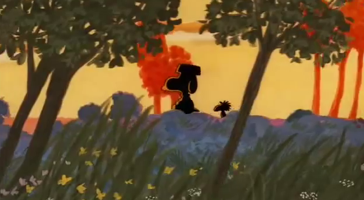 When Snoopy decides that he's going to leave Charlie Brown and move in with Lila, the narrative basically handles the situation as though Snoopy is dying. The kids have a "going away" party for Snoopy, but the writing and the way the characters act has overtones of friends giving eulogies funeral that even very small children will be unlikely to miss entirely.

This culminates in a scene consisting of Snoopy and the nearly entire cast of Peanuts bawling inconsolably, spewing tears from their eyes like fountains, while Schroder plays "It's A Long Way to Tipperary" on his piano. The sequence goes on for about thirty seconds, and while it's not as gut wrenching traumatic as, for instance, the death of Bambi's mother, or as soulful or artistic as Fiver searching for his brother in Watership Down, the sight of all these familiar, fairly innocent child characters in this simplistic, almost exaggerated expression of grief is at the very least uncomfortable, and for a small kid, maybe even upsetting.

Another memorable moment is the sequence featuring the song "It Changes". All the scene amounts to is Charlie Brown, after Snoopy has apparently left him forever, waking up in the middle of the night, pouring himself a bowl of cold cereal he doesn't have the appetite to eat, and then going outside in his night clothes and staring at Snoopy's empty dog house.

For a franchise which perhaps to a fault focuses so much on Charlie Brown's struggles with unhappiness, and often even uses it as the basis for its humor, 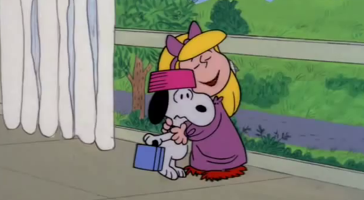 to actually see him go through this on screen is probably one of the more honest and heartfelt moments Peanuts has to offer.

This is particularly interesting as the loss of a pet is often one of the earliest experiences with loss a young person is challenged with navigating through, and this sequence depicts a relatable child character dealing with a realistic situation in a realistic way.

However, the movie isn't overly sappy or emotional, and lightening up the mood are scenes like Snoopy and Woodstock's encounter with a crazy little girl who tries to make Snoopy her pet, and Peppermint Patty taking Charlie Brown on a pseudo-date to a local carnival.

Snoopy does come home in the end of course, which should be obvious enough, but it happens by way of an ironic twist of fate the movie sets up nicely and does feel like a genuine surprise when it does happen.

In A Boy Named Charlie Brown and Snoopy Come Home, the films involve certain Peanuts characters leaving the typical setting of Charlie Brown's neighborhood. In the first film, Charlie Brown, Linus, and Snoopy go to Manhattan, and in the second film, Woodstock and Snoopy go on a trip to Lila's hospital which seems to be a day's walk away. 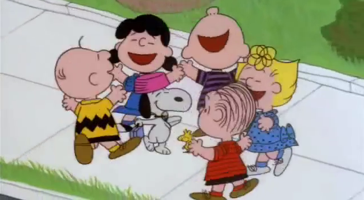 However, both of these movies still share Charlie Brown's neighborhood as their primary setting. The second two films of the Peanuts film tetralogy, perhaps in attempt to "up the ante" and retain viewership throughout multiple films, are set in more exotic locations far from the suburban streets and baseball fields that are the usual backdrop of the Peanuts universe, and as such, Snoopy Come Home is the last of the Peanuts films to take place in a setting reflective of the comic strip, TV holiday specials and the Saturday morning animated cartoon.

Like A Boy Named Charlie Brown, the animation of Snoopy Come Home is essentially identical to that of the televised Peanuts holiday specials of the era, and for a theatrical release, it was an extremely distinctive move, but the increased budget and work-hours allow for some pivot shots and slightly more dynamic "camerawork" as it were, than what would be seen on TV.

I would absolutely recommend Snoopy Come Home, my fond memories of it hold up every November when I pop in my old VHS tape recorded off TV back in the early 1990's.

Now, for some nitpicks and observations of mine. 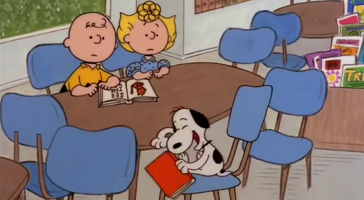 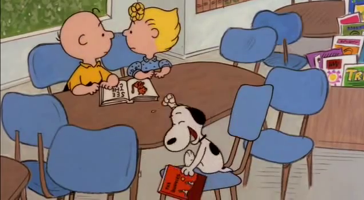 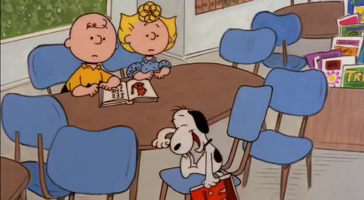