(due to technical difficulties, I am currently unable to trade tapes. I'll update when this situation changes)

Vintage tapes recorded from television in times past are pieces of history.

Watching a day of television recorded when I was a child is quite possibly as close to actually going back to that time that I could ever hope to achieve.

Seeing commercials advertising the stories of evening news shows and seeing the types of products being sold give the programs a valuable historical context and nostalgia factor that commercial DVDs just cant provide. It's almost like a time capsule of that day.

A day of television 20 years after it aired is essentially lost forever unless recorded, and with the dozens of copyrights and contracts involved that have changed or are no longer in power, the only way they can be seen again in their entirety is if somebody happened to get it on tape.

A tape's survival depends on it being appreciated enough to not be thrown out or recorded over, yet not being watched so often that it gets worn out and unplayable.

Growing up in Queens without cable meant only being able to choose between channels 2,4,5,7,9,11,13, and the mysterious Channel U which featured nothing but South Korean soap operas.

With relatively (compared to today) few shows to choose from, and with channels still “signing out” at the end of the day rather than repeating their primetime block all night or running informercials, there was a LOT of time in which my Grandma would want to watch TV but find nothing on, so to make up for that she brought a bunch of VHS tapes and started recording DAYS AND DAYS worth of network television to she could watch the tapes when nothing she liked was on.

Additionally, while Mom was expecting me, Grandma had the foresight to start recording kids TV so I could watch the tapes once I was born, and once I was born, she continued taping my television viewing quite frequently, and Mom helped as well, and this amounted to quite a library.

While some of these tapes have been lost to deterioration, being eaten by broken VCRs, being magnetically wiped, watched to death, deliberately or accidentally recorded over, or just flat out being lost, more than 20 of these vintage tapes survived the ages and are in my collection.

This collection of tapes ranges mostly from 1987 to 1995, and at least two or three of them consist mostly of Christmas programming (yes, Christmas, not “holiday”).

The tapes have been floating around my house for ages, but it wasn’t until about 2004 that I started gathering them all and keeping them in one place for safe keeping. In 2005 I hooked up two VCRs together and dubbed several tapes filled with programming from 1993 to 1995 onto a fresh VHS to minimize wear on the original.

This was the beginning of the STSH Vintage Tape Archive.

In August of 2008 upon realizing that the DVD player in my living room was also DVD-RW capable, I got out my VCR from my bedroom and hooked it up to the input jack on the DVD player, popped in a blank DVD-RW and made a short test run with an expendable VHS I had laying around.

The simple setup resulted in a high quality digital reproduction of the tape in its less than high-quality condition, which pleased me immensely because I had been planning for years to shell out for some sort of expensive specialized studio grade VHS to DVD transfer equipment to do the same thing.

Since I've gotten a few requests from people asking to trade their vintage tapes for some of my own, here is a listing of my current archive, which will grow as I preserve and evaluate my huge collection.

GOOD   - In satisfactory, watchable condition with minimal loss in quality.

FAIR      - Playback quality has suffered due to age, but far from unwatchable. May have occasional sound and tracking issues which can be overlooked.

POOR    - Playback quality is boardering on unsatisfactory, but is still in watchable condition. Video may be distorted, with very fuzzy sound quality.

BAD      - Video and/or sound is severely distorted to the point where enjoying the material may be a challenge.

DEAD   - Tape is completely unwatchable. This also applies to tapes recorded over with non-vintage material, even if it's of POOR or better quality.


Please note that the tapes in the STSH Vintage Tape Archive are not unauthorized copies of commercially released VHS tapes or DVDs, but lawfully home-recorded tapes of broadcasted programming made with my VCR, which are not for sale.

Original VHS intact and in GOOD condition. Archived on 8/17/08


NOTES:
Recorded entirely on FOX during a Wonderful World of Disney marathon dubbed “Day Off With Disney”, possibly a special holiday programming block.
Atari 2600 commercial at 5:09:94. 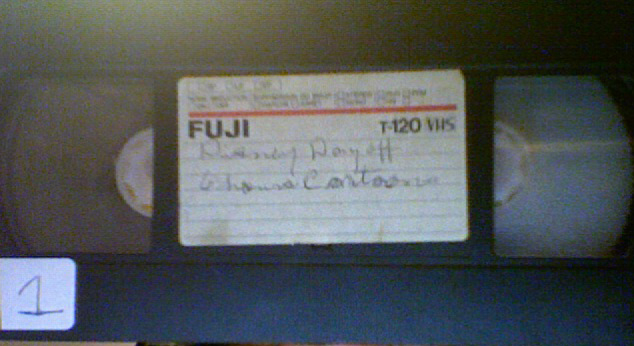 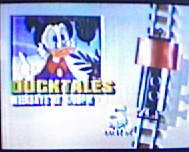 Original VHS in playable condition. Playback quality is POOR in parts, but generally is FAIR. Archived on 8/18/08

Recorded by Grandma in 1991, identified by commercials for “The Rocketeer”

Programming recorded from WORR-TV Universal 9 in 1991. 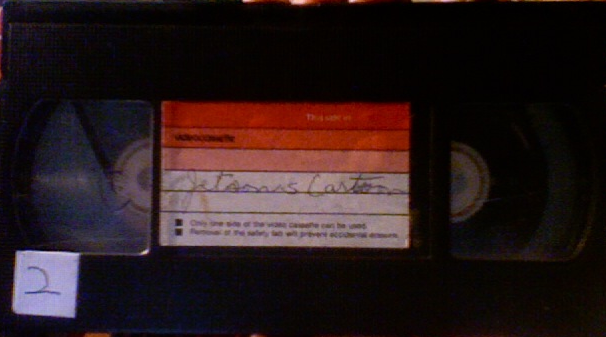 Original VHS in playable condition. Playback quality is generally GOOD, but may be considered FAIR in some parts. Archived in August 08.

Programming recorded from WORR-TV Univerasl 9 and CBS in 1991. The first hour was recorded over with non-vintage material, which I did not include in the archived version.

I cut out the remainder of the Sesame Street material at the end from the archied version, it continued for perhaps an hour and a half or so beyond the point where I stopped filming. There was little personal interest in preserving it, especially due to the lack of commercials as it was on PBS. 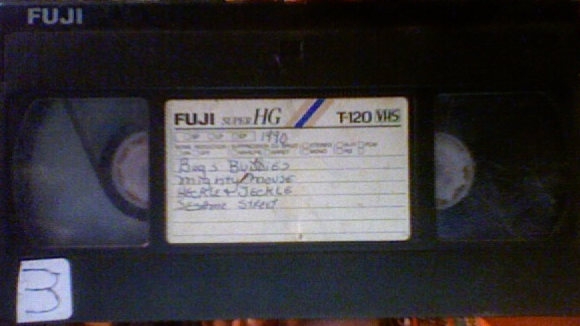 Recorded by Mom circa 92

Great Pumpkin Charlie Brown was recorded on Wednesday, October 27 at 8:30 PM on CBS, and is incomplete because as a child I stopped the recording so I could watch a funny part of the show over again. :P

The Nickelodeon Sports Theatre special was recorded in 1995. 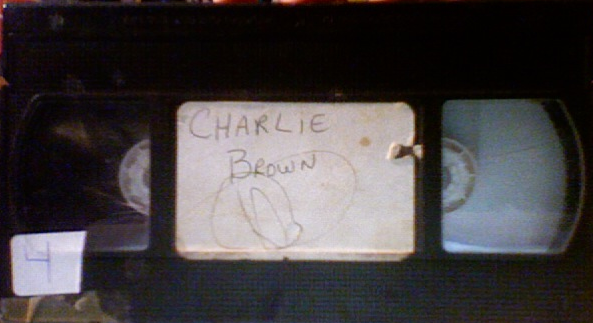 Most of these shows were recorded off Fox except for "Inspector Gadget" and "Merry Melodies" which came on Univesal 9 .

"Riders in the Sky" was a CBS show and was recoreded shortly before halloween 93.

00:00 to 1:50 were Recorded from Fox on Saturday, October 23, 1993, as identified by an upcoming commercial for Simpsons Treehouse of Horrors IV and the presence of Little Shop

"Bugs Bunny and Tweety Show" recorded from ABC in 1991 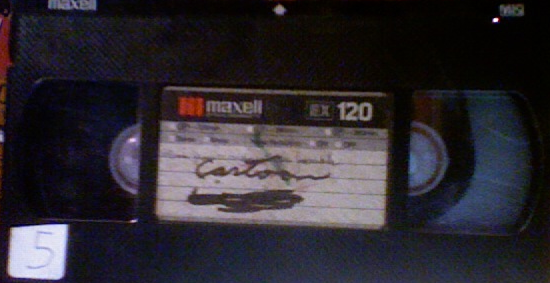 Rebel Without a Cause

Playback is of GOOD quality. Only the cartoons on this tape are currently preserved on DVD. Cartoons preserved in August 09

Cartoons recoreed from CBS in 1988.

Even as a very young child I appreciated this tape more than others due to it's age. 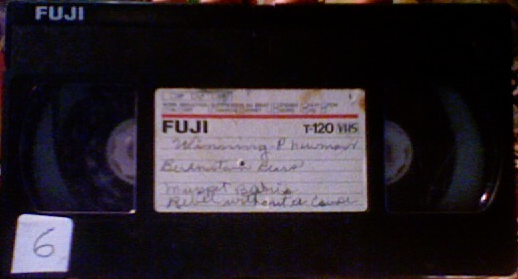 Playback is of of FAIR to GOOD quality.

The first two shows were recorded from The Disney Channel in 94 or 95. New York Undercover was recorded from Fox during the same time period. DEAD, this tape dating to 1994 was somehow recorded over entirely with infomercials dating to 1999. The informercials are of POOR to FAIR quality.

Originally probably recorded by Mom in 93 or 94, and destroyed in 1999 when used to record a block of cable TV infomercials.

I can only guess at what was on this tape, but I do know that  it probably would have been considered one of the more valuable tapes in the Archive had it survived. I was so excited about this one that I gave it a VTA number before I even played it to find that it was dead. 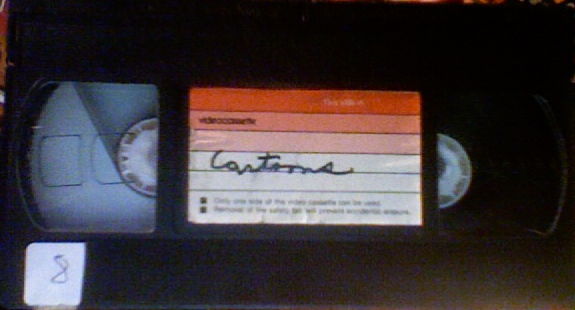 This tape was made in 2005 and is in GREAT condition, but the material on it was dubbed from several (still un-numbered) tapes whose playback quality varies from FAIR to GREAT.

Recorded by me in 2005 to save ware on the original copies of several different vintage tapes.

The Charlie Brown movies and Raggity Ann and Andy cartoons were recorded from WPIX on Thanksgiving, 1993. I recorded Legends of the Hidden Tample of Nick GAS just to fill out the rest of the tape. Ironic how now I took Nick GAS for granted back then and now it's actually part of the Vintage Tape Archie.

Even in the four years since making this compilation, the playback quality of the original tapes has suffered significantly, highlighting the importance of this preservation effort. 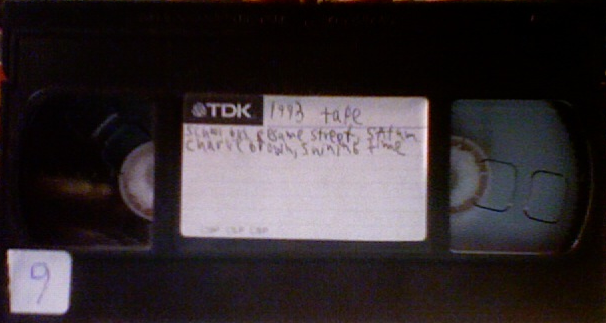 To inquire about trading vintage home-recorded tapes with me, drop me an email at.

(due to technical difficulties, I am currently unable to trade tapes. I'll update when this situation changes)
Please note that the tapes in the STSH Vintage Tape Archive are not unauthorized copies of commercially released VHS tapes or DVDs, but lawfully home-recorded tapes of broadcasted programming made with my VCR, which are not for sale.